Need some help on your next project? Drop me an email: matt@mcollins.co.uk
Matt Collinsdeveloper & technical lead

I’ve just launched Burgopak.com, a new product showcase for Burgopak. One of the main challenges was using the existing Django-based site that runs Burgopakstudio.com, Burgopak’s consultancy business, to also run Burgopak.com. The Burgopak team wanted a single CMS that could control both sites and were keen to keep the current CMS as they were comfortable using it.

The solution came from a combination of infrastructure configuration and application configuration. Here’s how I achieved it. 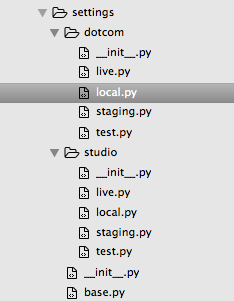 I started structuring the codebase to separate the Burgopak.com (dotcom) and the Burgopak Studio (studio) sites. All my Django apps sat within a corresponding directory for the site they were used on. Within my settings directory I followed the same convention, creating a set of settings files for each site that extend a common base settings file. The main advantage from doing this was that I could then specify what URLs each of the sites would use with the ROOT_URLCONF setting. I also updated TEMPLATE_DIRS so I could separate out template files for each of the sites.

##Configure supervisor to run two instances of the application from the codebase The current Burgopak Studio site was using a combination of Gunicorn and Supervisor to run the Django application behind NGINX. When using Supervisor you create configurations for ‘programs’ which supervisor will then run & monitor, restarting on crashes. By creating a program for each of the sites that specified the different settings file to use and a unique port to bind meant the codebase could be running in two modes side-by-side.

##Run your tests on one site at a time Because of the different ROOT_URLCONF settings, running tests with the wrong settings file can lead to lots of failures when the test client can’t request URLs. I just ran two separate test runs on my Codeship builds that specified the settings file but also the path to that site’s code like so: